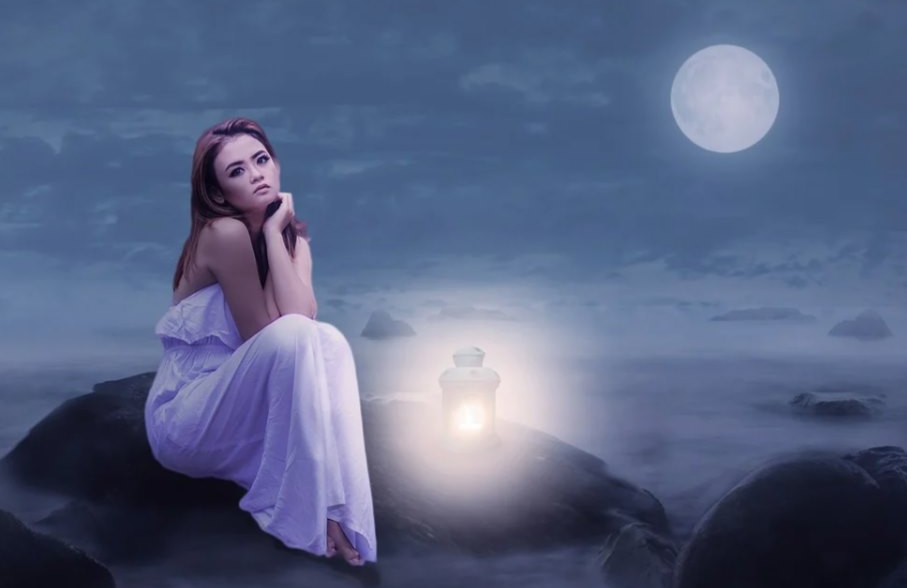 Reuben watched her from a distance. He knew better than to disturb Mara when she was out on the rocks. He hated himself for it. The reason she sat out there and wailed the night away. The fog was coming in thicker tonight, but he kept watch; focusing on her lantern to keep a fix on her position. All the while, running the events of last year through his mind. Could he have done anything differently? Should he have refused Tom a place on his crew? He had no way of knowing that storm would come. No way of knowing that the mast would snap like a twig, tossing the crow’s nest right into the craggy rocks. It took the better part of a week for Tom’s storm-wracked body to wash back ashore.

When his body was first found, Mara went into such a grievous shock that she went into early labor. Three days later, she found herself burying both husband and son. Ever since then, she has walked the rocks; singing like a siren in the hopes that it will bring them all together again.

He is always afraid she will slip herself into the cold northern waters so that she can sleep forever with those she loves. His guilt haunting him, he shifts his position so that he can see her better. Two small stones cascade down to the water, barely making a sound. But it was enough to cause Mara to jump to her feet.

“Show yourself!” She screamed. “I know you’re watching me, Reuben Crisp!” She quickly scrambles to a higher rock, shining her lantern towards the shore.

Sighing, Reuben hoisted himself to his feet, or foot as the case was, as he had lost the one to frostbite as a young lad. The grief was hard for him to bear too. Tom wasn’t just his chosen first mate for that fateful fishing trip. He was his baby brother. The one he saved from freezing to death the winter he lost his leg.

Mara came barreling up to him. She looked like a water fairy next to his six foot four massive built frame. God! How he adored her! But he dare not let her know. He had stayed silent when she chose his brother. He had stayed silent all this year. Yet he wanted to tell her that he had loved her from the moment her mom had let him hold her when she was no more than a newborn babe. He had promised then that he would always watch out for her and he planned on making good on that promise. So far, it was the only one he had been able to keep.

“What gives you the right to spy on me in my grief!” she demanded as she slammed her tiny fists into his chest. He would take all her anger if it could bring them back.

“I just wanted to make sure you made it back to shore safely, Mara.” he looked away as he spoke, lest she sees the tears welling up in his eyes. How could he tell her of his love for her? After everything that had happened between them.

“Why do you care if I make it back or not? You probably wish I was dead too!” she wailed as the tears streamed down her face. Did she dare tell him the truth? That she loved him. That she always had. She regretted marrying Tom. He had been a cruel husband. He blamed her for his shortcomings and inability to be a real man. He came close to strangling the life out of her one night. But he left her on the floor, gasping for breath.

When she awoke the next morning, he was gone. She didn’t see him for days. Then he came home with a man she had never seen before.
“I found him, Mara, my love!” he declared.
“Found who?” she asked.
“The man that can be the father for our children.” He stared at her with hardened eyes as he watched the realization of his words sink into her heart. He then quietly turned and bolted the door and sat in a chair. He watched as the man took his wife. He watched for hours until Mara finally screamed in agonizing pain. Then he grabbed the wretch of a man up and tossed him out the back door and his clothes after him.

Tom then tossed a rag in her direction. “Now go wash yourself, you worthless whore!” He shouted while opening a fresh bottle of whiskey.

Then the wait began. But the answer didn’t take long to reveal itself. Within two months they both knew she was with child. The whole village was overjoyed at the happy news.

Even Reuben seemed overjoyed, saying he couldn’t wait to become uncle Reub. She slowly started to die inside. She knew the bargain her husband had made with that devil. He would be back in two years. And now one and a half had passed.

Dare she tell Reuben the truth? That his brother had been a devil? Would he believe her? Would he protect her from the devil to come? She was afraid to find out. She was afraid she really was all alone in the world. Her parents were dead. Her brother and his wife lived far away and her sister was a maid with no way to help her out.

“Mara”, Reuben’s quiet and defeated voice brought her back to reality. “Would you care for some tea?” It was only then that she realized that they had walked all the way back to her cottage.

Mara nodded her head and was grateful to warn her hands by wrapping them tight around the mug full of steaming hot tea. They sat in silence for what seemed an eternity. The only sounds were the clock ticking away on the wall and the distant crash of the waves below. Mara and Tom’s cottage sat perched on the cliff that looked out over the bay. They could sit on the front porch and gaze across and watch the townspeople go about their daily business.

Now Reuben was standing and putting on his coat and hat. “I know things are hard right now, Mara,” Reuben said. “But I promise to help as much as I can. The fishing season is about to start again and the ship has a full crew. I won’t allow you to starve.”

He stared out past the rocks to the far side of the bay.
“Hopefully, the weather will remain fair and we will have good sailing.” With that, he donned his cap and walked out the door which Mara promptly bolted shut.

She then gratefully sank into her bed and fell asleep.

Mara watched the ship leave the harbor two days later. She was, once again, totally alone with her thoughts. She stared out at the ocean wondering what would be the best for her to do. Should she end it all while Reuben was out to sea or just pack up and leave?

“Mara!” Hearing her name bolted her back to reality. Her sister, Megan, had come for a visit. “I need your help, sister,” she said. “The upstairs maid quit and the Davenports need a replacement right now.”

Mara saw this as an opportunity. She could earn money to leave Watertown for good. Then maybe, that devil would never find her and she would be safe. So, she packed her stuff and moved in with Megs.

Reuben was both shocked and pleased at the news when they got back to port after three weeks at sea. It had been a truly successful trip. Their catch fetched quite a pretty price at the market in Boston. Not only had he been able to pay his crew well, but he had money enough to pay the final payment on the headstones for his brother and nephew. Both of which, were being put in place at the graveyard.

Things seemed to be going quite well. Maybe he and Mara could move past their mutual pain of loss and forge ahead together. They both secretly hoped this, but only time would tell if the devil would ruin the plans of the heart.

Jennifer Jennings Daves has always loved to write and dream up stories. Born into a military family, Jennifer started creating her own worlds at an early age. As she grew, Jennifer was an avid reader and enjoyed many genres. As high school approached, the writing bug hit and she joined her high school's newspaper staff. During her senior year, she was the business manager for the Wingspan. She put her writing on hold while raising her family and has recently started back now that the children are older. You can find her on Facebook or at her website, both aptly named iworeabraforthis.