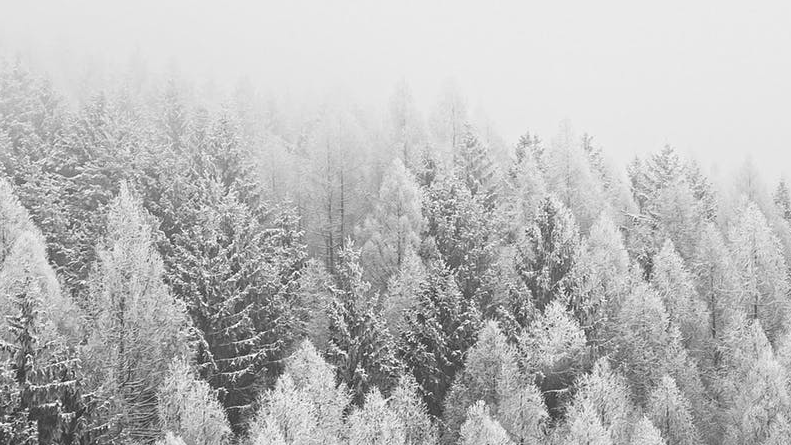 The chill of the morning airbrushed across the snowy mounds surrounding the frozen hut. Its cool breeze playing with the fox furs lining the small entryway. The sun was only beginning its slow climb while the moon still lingered, whispering of the long night’s chill. From a small pipe in the hut’s peak, a small burst of steam made its escape with the smell of herbs and boiling water. As the day wakes, so does he.

After long hours of frozen gold beating across the plains, as the sun weighs heavy and the moon reclaims its place in the sky. Steam from the hut thinning, as fresh snow swallows the day’s tracks. Furs of another fruitful day swinging in the night’s wind as dreams, carried by the distant howls of wolves, beat back against the evening chill. Sleeping imaginations of one who would call these lands home.

As the sun again stirs and the reluctant moon fades, the soft snow is pressed hard by the weight of another. The heat of its breath escaping into the morning air as the whisks of smoke begin to streak from the top of the hut. The scent of dried blood and fur having coaxed his visit.

A stirring, a rustling from inside the hut as a deep roar startles the unsuspecting hunter. Scrambling for his clothing and weapon he moved to act, he, was too slow. Chunks of ice and snow flew as the enormous paws of a fully grown white bear cut the air inches from him. The hunter, only half-dressed, stumbled into a roll towards his exit, or what yet remained of it.

Coming to his feet with spear in hand, breathing rash, he aimed. As traces of crimson painted the air and snow, the beast stumbled back. Shoulders and body still sore, the man approached slowly towards his unlikely guest. Snow whisps melting as they break against his bare chest, his breathing now slowing. Gently, still not yet fully recovered, he crouches down looking for another spear. With the shafts mostly shattered he takes hold of what he can, more a dagger than a spear. The raw mass of the bear began to settle, its bloodshot eyes narrowing on the hunter. Rage now consuming its every thought, the beast rose its paws high in the air and lunged. Seizing the moment, our hunter steeled his body and charged.

Streaks of thick blood stretched across the white snow and dripped from the edges of shattered ice. The beast grunted as it tried shifting its weight. The ground beneath shaking as it collapsed onto its side. Half-covered in crimson and bracing a now shattered shoulder, now a calmer man, spearhead still in hand, he stood. Standing over the wounded animal, watching as it labored with each breath. He lowered himself to his knees. This had not been his intent, the bear not his prey. These lands belonged more to it than to him, but it had fought with strength, as had he. And so, as the moon waits to rise again, the cycle continues.

Carlos Costa is a teller of tales nearly long forgotten. If age is gauged by one’s experience than to call him an old soul would be an understatement. A writer, a debater, one who tells stories as furiously as he seeks them out. Carlos has been writing poetry, short stories almost as long as he’s been telling them. Horror, Fantasy, and Sci-Fi have always been home but in truth. Carlos will pull his writing from anything that inspires him, and so, nothing is really of the table. Being born in Western Europe, and despite making Canada his home from an early age. He has always been drawn the folklore, mythos, and legends normally ignored by modern literature. With so many stories built on the same foundations as those before them. His goal is both to breathe new life into the things we read, and to reveal legends many would otherwise never experience.